Jeremiah 1 - A Prophet Called by God to the Nations

Bible references:  Jeremiah 1; v1-8; Galatians 1:15
A message for the nations.
Jeremiah came from a suburb of Jerusalem.  He spoke through several king's reigns.
Josiah,  became king at 8 years old.   He takes the people back to God.   He restored the Law of the Lord back.   Jeremiah begins preaching 'beware'.
There was a specific time given to Jeremiah to bring the Word of the Lord.
Jeremiah begins his ministry in the thirteenth year of Josiah's reign. He preached that the nation would be going into exile in Babylon.
The word of the Lord came to Jeremiah saying... v5.  He heard the voice of God.
God formed Jeremiah in the womb, set him apart, made him a prophet to the nations.   God chose him, sanctified him, set him apart as a prophet before his birth.
Galatians 1:15 - God called Paul and commissioned him.
God calls people as He needs them.   Think of David,  Gideon.
2 Corinthians 2:15-17 - when God calls you to go, Go.  When He calls you to stand, stand.
Isaiah 55:7 - His word will not return without accomplishing what God wants to accomplish.
Like Jeremiah,  sometimes ministry is painful to the heart, as we weep for others, for our nation.
God didn't listen to excuses.   He 'touched Jeremiah's mouth '.
Luke 12:11-12 - when we try to defend God in our own power,  you won't be able to do so.
Jeremiah 1:8
Matthew 10:28
You were born to live eternally.   Be afraid of God who can destroy both soul and body.
Isaiah 6:7 - he had a clean mouth to speak the Word of God.  He was given a message,  but a clean, pure message.
Jeremiah 15:16-19
You need to be sure of where the Words come from.  God used Jeremiah as his mouthpiece,  speaking God's word.
Jeremiah could only rely on the words of God.   Not words that took years to study.  But what God puts into us.  We've got to allow God to speak through us.  Gods word proves to be most powerful.
The words of Jeremiah are still current today.
Jeremiah 1:10 - God put Jeremiah as prophet over the nations.   Today, God is looking for people who will speak his Word. 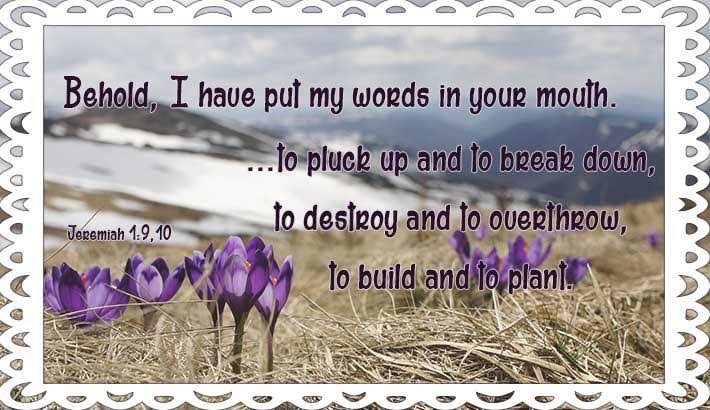