Water.  An essential part of life.  For people, for animals and for plants.  Water is even essential for fish and marine life.

Water is often spoken about in the Bible.  Sometimes water is referred to as life giving, refreshing.  Sometimes it’s referred to as being in cisterns.  What is a cistern?  It’s a  storage facility to hold water.  Places that have cisterns hold the water for the dry times, or times of siege. Cisterns are not life giving.  They often hold stale, still, stagnant water.

“…In the Middle East, water is scarce and precious, and very much needed for survival. Only a few months of the year does rain fall in Israel, and the rest of the time the ancient peoples survived on stagnant water that was stored in cisterns in the ground. When rain does fall after many months of clear blue skies, it seems to be a miraculous gift from God.
The difference with or without rain in Israel is amazing – the hills can be barren and brown much of the year, but after a season of rain, covered in green meadows and flowers. Where there are rivers, lush vegetation surrounds them, while only yards away, all is barren…” http://ourrabbijesus.com/articles/living-water/ 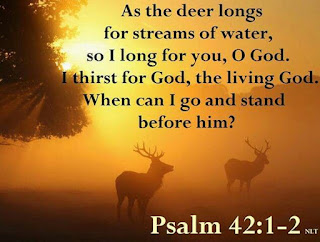 Psalm 42:1-2, refers how like a deer, David longed for the refreshing water; thirsting for God.  Perhaps he was thinking of a cool refreshing place such as En Gedi where there is a beautiful oasis in the desert.  Green life, cool water, clean, a wonderful place that a person longs for after being in the desert places and drinking from cisterns.

Water that is clean, clear and running is life giving.  Water stored where it doesn’t move, is not life giving.  Sure you can survive, but it doesn’t refresh you.  In John chapter 4, Jesus interacts with a woman at a well. Her culture and faith was different to Jesus’.  She was called a Samaritan.  Yet, this nameless woman longed for clear, refreshing, life giving water. In her life – physically and spiritually. Jesus shares with her, that he is the one who provides life-giving water.

“This image of living water is therefore an important feature of the ministry of Jesus. In the book of John, he explains that he is the one who truly brings living water into the world. He says to the Samaritan woman,
Everyone who drinks of this water will thirst again; but whoever drinks of the water that I will give him shall never thirst; but the water that I will give him will become in him a well of water springing up to eternal life. (John 4:13-14)
And later, during the feast of Sukkot, on the last and greatest day, when the prayers of Israel were an impassioned plea for God to bless them with rain, Jesus stood up and shouted, saying,
“If anyone is thirsty, let him come to Me and drink! He who believes in Me, as the Scripture said, ‘From his innermost being will flow rivers of living water.'” But this he spoke of the Spirit, whom those who believed in him were to receive; for the Spirit was not yet given, because Jesus was not yet glorified. (John 7:37 – 39)”. Reference: http://ourrabbijesus.com/articles/living-water/

When we pursue substitutes for God, they take over and we are not refreshed.  What are substitutes? Career, relationships, money, possessions, friendships that take over a more important role than God, behaviors, judgmental attituded (I don’t need to attend church because I’ve grown more… ☹) alcohol, drugs.  What happens when we pursue these things and not a relationship with Jesus who brings life and refreshment?

Psalm 63 is written by David and he recalls how he longs for God like he longs for water in a dry and barren land.

“You, God, are my God, earnestly I seek you; I thirst for you, my whole being longs for you, in a dry and parched land where there is no water.” Psalm 63:1

In 1 Samuel 23 we read that King Saul is pursuing David in order to kill him and after David had been hiding in the desert, he went to the strongholds of En Gedi.  At EnGedi there is water, clean, refreshing water.

“Even though there are many springs around the Dead Sea, most of them have a high salt content. En Gedi is one of only two fresh water springs located on the western shore of the Dead Sea and, because of the greater availability of land for agriculture at En Gedi, it is the best spring by which to settle.
Josephus praised En Gedi for its palm trees and balsam, and the writer of Ecclesiasticus spoke of wisdom that was exalted like a palm tree in En Gedi” (24:14).  One day, the prophet Ezekiel predicted, fishermen would line the shores of the Dead Sea by En Gedi (47:10). Around 1000 BC, En Gedi served as one of the main places of refuge for David as he fled from Saul. David “dwelt in strongholds at En Gedi” (1 Sam 23:29). En Gedi means literally “the spring of the kid (goat).” Evidence exists that young ibex have always lived near the springs of En Gedi. One time when David was fleeing from King Saul, the pursuers searched the “Crags of the Ibex” in the vicinity of En Gedi. In a cave near here, David cut off the corner of Saul’s robe (1 Sam 24).”
Reference: https://www.bibleplaces.com/engedi/

Psalm 1 tells us, ”Great blessings belong to those who don’t listen to evil advice, who don’t live like sinners, and who don’t join those who make fun of God. Instead, they love the Lord’s teachings     and think about them day and night.  So they grow strong, like a tree planted by a stream— a tree that produces fruit when it should and has leaves that never fall. Everything they do is successful.” Psalm 1:1-3 (ERV)

Otherwise, we are trying to share the Good news in our strength and we will be cistern building.  We won’t bring refreshment but stagnant, stale water.  Instead of bringing hope, we will bring rules.  Instead of a relationship with Jesus Christ, a long list of religious “to do’s” that even we cannot keep.
“For I will pour out water on the thirsty land, and streams on the dry ground; I will pour out My Spirit on your offspring and My blessing on your descendants; and they will spring up among the grass like poplars by streams of water.” (Isaiah 44:3 – 4)

How will we grow strong, like a tree planted by a stream?  Spend time with God and His Word and then go out in the power of the Holy Spirit to share how Jesus has changed your life from a dry, broken, lost person to one who has hope and future.
We also need to be aware that’s it’s tempting to stay at En Gedi.  Life with refreshement, encouragement.  But we are called to go out into the desert and bring the message that God loves people and Jesus Christ died to save them, so they too can come to En Gedi and be refreshed with God’s life-giving water.

How do we live?  Is it in such a way that brings life?  Or do we cause others to stumble in the dryness of the desert by our attitudes of judgement and self-superiority? Do we impact our Culture so they seek Jesus or do we impact our culture to turn people away? Are we refreshing, life-giving people who seek to help, care and put others needs before our own? Or are we cistern building by bringing a list of do’s and don’ts that even we can’t keep? Is our focus on how Jesus sees the people around us or is our focus on how much better we perceive ourselves to be?

What is the tragedy of turning away from God and depending on our own cisterns?
Jeremiah 14:1-3  “This is the word of the Lord that came to Jeremiah concerning the drought: Judah mourns, her cities languish; they wail for the land,  and a cry goes up from Jerusalem. The nobles send their servants for water; they go to the cisterns but find no water.  They return with their jars unfilled; dismayed and despairing, they cover their heads.”

Let’s not depend on our own cisterns and strength, this will dry up.  Let’s depend on God’s life-giving water that brings refreshment, hope and peace.  Let’s seek to build our relationship with Jesus Christ who brings us living water.
at February 18, 2019

The supremacy of Christ's Authority

Thinking about communion and the supremacy of Christ to know how He is far above all things. How nothing in all of creation compares to Hi...