One night only - Stan Goodenough

ANZAC, BEERSHEBA AND RESTORING THE KINGDOM TO ISRAEL

How Australia helped - and still can help - to prepare the Way 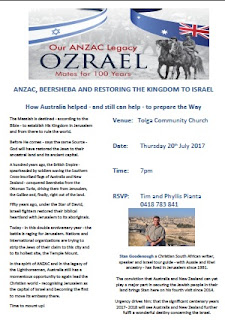 The Messiah is destined - according to the Bible - to establish His Kingdom in Jerusalem and from there to rule the world.    Before He comes - says the same Source - God will have restored the Jews to their ancestral land and its ancient capital.

A hundred years ago, the British Empire - spearheaded by soldiers waving the Southern Cross-inscribed flags of Australia and New Zealand - conquered Beersheba from the Ottoman Turks, driving them from Jerusalem, the Galilee and, finally, right out of the land.

Fifty years ago, under the Star of David, Israeli fighters restored their biblical heartland with Jerusalem to its aboriginals. Today - in this double anniversary year - the battle is raging for Jerusalem. Nations and international organizations are trying to strip the Jews of their claim to this city and to its holiest site, the Temple Mount.

In the spirit of ANZAC and in the legacy of the Lighthorsemen, Australia still has a momentous opportunity to again lead the Christian world - recognising Jerusalem as the capital of Israel and becoming the first to move its embassy there.    Time to mount up!

Stan Goodenough a Christian South African writer, speaker and Israel tour guide - with Aussie and Kiwi ancestry - has lived in Jerusalem since 1991.  The conviction that Australia and New Zealand can yet play a major part in securing the Jewish people in their land brings Stan here on his fourth visit since 2014.  Urgency drives him: that the significant centenary years 2017- 2018 will see Australia and New Zealand further fulfil a wonderful destiny concerning the Israel.

Stan Goodenough is coming to Tolga Community Church for one evening only on Thursday 20th July 2017 at 7pm.

2 Chronicles 20:7: Art not thou our God, who didst drive out the inhabitants of this land before thy people Israel, and gaves...