Fearless preachers; they were out there.  They were stoned, imprisoned, yet they considered themselves blessed.

The message cuts, if the world likes us then we need to consider what message we are preaching.

In book of Galatians the people got the message but then people came along to say they had to follow the Law (Judaism).  But that's not the gospel message given to them.

Thessalonians models how the church should operate.

They took the beatings; they faced persecution and they praised God and loved the people around them.

V 7 - the apostles put into people wholeheartedly.   The gospel is not a commodity we give to people.  It's not a duty.  The gospel penetrates and transforms us.

Nursing mother - who cared, fed and brought up children.   They gave; they didn't take.

The nursing mother took care of child as if the child was their own.  The church in Thessalonica was like a newborn who needed a nursing mother.   It required the apostles to give themselves wholeheartedly to their care.

They treated the new Christians with real fatherly love.   v 12

The Galatians almost lost their faith.

Sometimes we treat God by giving him a tiny amount of ourselves.  God wants to give all of Him to us.

We need to be about God.  Not religious laws, not traditions.   About God.

A lot of children want to please their parents and they respond well to encouragement.

Barnabas - son of encouragement.   He demonstrated his care and character in reaching out to Saul who was renamed Paul.  He did his role and became a 'father' to Saul.  His role was to comfort and teach and to be steadfast.   Lamentations 3 - be there for what God wants usto do.

v 9 - they did not become a burden to the people.   They came, preached the gospel  and were blameless.

We worry about being liked.  But being respected is more important. 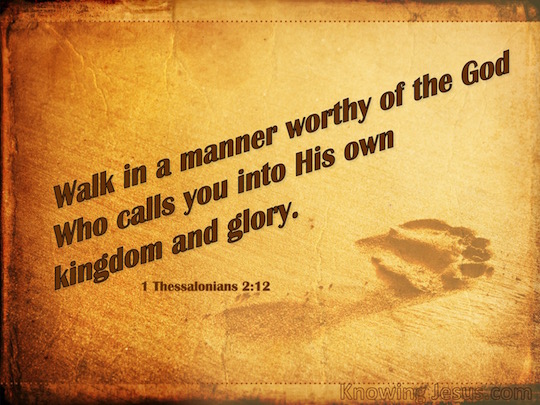